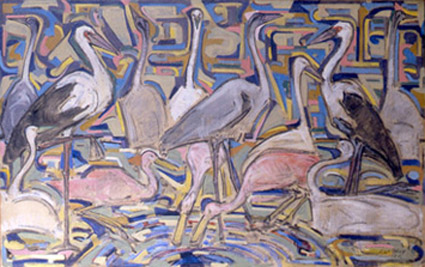 Connecticut's first art colony was in the Cos Cob section of Greenwich. Within the neighborhood was a house called the Holley House, where such notable artists as Childe Hassam, Theodore Robinson and John Henry Twachtman taught their many students the theories and methods of American Impressionism.

Another notable student of Holley House was Elmer Livingston MacRae, who would also marry the Holley's daughter, Constant. He was born in New York City in 1875 and began taking classes from John Twachtman in 1899. He established a studio of his own in Holley House in 1900. He staged several exhibitions in the house from 1908 to 1911, all to much critical acclaim.

He had a distinct interest in Japanese art, and a remarkable ability to find inspiration in his immediate surroundings. He was able to apply these two characteristics to his art, in which he always used a unique perspective and the effects of light and shadow. A common subject for much of his work was his wife and daughters who he would depict in domestic settings as well as outdoors in the light of day.

During his career he would serve as an original organizer of the landmark New York Armory Show of 1913 which introduced the American public to modern art. He was a founder of the American Pastel Society as well as the Greenwich Society of Artists.

MacRae's paintings are in the collections of many museums and galleries, including the Whitney Museum of American Art, the Metropolitan Museum of Art and the Bush-Holley Historic Museum in Greenwich, Connecticut (which also has his entire studio on display as well).