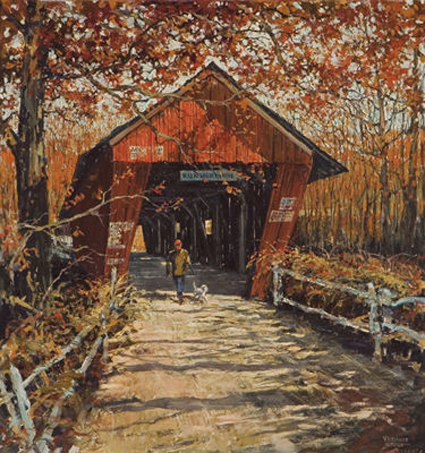 Artist Eric Sloane led a life remarkable for its abundance of stories, work and knowledge. He is considered a master cloud painter; with a mural covering an entire wall of the Smithsonian Air and Space Museum and his first such painting in the vein was purchased by Amelia Earhardt. He was taught to fly by famous pilot Wiley Post in exchange for painting lessons. He is a scholar of all things "early American", having authored thirty eight books on everything from tools to wood. He painted an estimated fifteen thousand paintings during his life. He is credited with creating the first television weather forecasts, and he learned the art of hand lettering and sign painting from Frederic Goudy, the man who invented the famous "Goudy type" font used by millions of people each day.

These achievements are individually remarkable, but the life of Everard Jean Hinrichs, as Sloane was born, would be filled from its earliest days with fascination for the young man. At the young age of fourteen he had a falling out with his well-to-do family and began a journey west as an itinerant sign painter.

He traveled all the way to Taos, New Mexico where he encountered the thriving artist community and the colorful scenery. There he would continue his sign painting; he would also befriend many Native Americans and begin painting on masonite. This technique would continue throughout the rest of his life.

He returned to New York, where he began formal art training at the Art Students League, and where he found his professional name. He took his first name from the word "America" and assumed the surname of Sloane in tribute to his teacher and mentor John Sloan.

His paintings were always reminiscent of the Hudson River school tradition, but he would create his own unique style composed of oil on masonite scenes, done once each day before the lunch hour.

His fascination with early American tools and a rural lifestyle populated many of his paintings, additionally the landscapes where he had traveled in his early life, and the New England and Taos locations in particular, would serve as the focus for most of his brush work.

His works are in many major American museums, and the Sloan Stanley Museum in Kent, Connecticut is dedicated to the artist's life and works. It is also the location of his vast collection of early American tools, and is where the painter was buried in 1985.