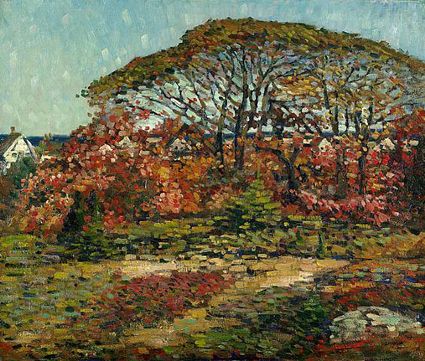 Pastel painter Charles Salis Kaelin worked as a highly regarded and successful commercial lithographer for many years before giving up his career and becoming a full time painter. His desire for solitude led to him being frequently called the "hermit painter", but he enjoyed a wide amount of critical and public attention throughout his life.

He was born the son of a professional lithographer, and he followed in his father's professional footsteps, but he also took evening classes at what would become the Art Academy of Cincinnati. Additionally, he began studying with John Henry Twachtman at the age of twenty, and learned from him the earliest forms of Impressionistic style in the landscape.

He journeyed to New York, enrolling in the Art Students League, and working for the Strobridge Lithographic Company in the creation of theater posters, advertisements and calendar art. He would make many painting and sketching excursions throughout the years, always using pastel crayons for his works. Because of his professional reputation, the Cincinnati Art Museum staged a solo exhibition of his work in 1899, and from that point on he was a well regarded painter.

He traveled to Gloucester, Massachusetts in 1900 where he found incredible inspiration with the many American Impressionists capturing the brilliant landscapes and scenery, and who also introduced him to Divisionism (Pointillism). His works began to reflect the influences of his new friends and critics took note. By 1916 he was able to transition to a full time painting career.

Settling in Rockport, Massachusetts he continued to exhibit widely and win many major awards. His works are in numerous public and private collections, and can be seen at such places as the Cincinnati Art Museum, the Metropolitan Museum of Art and the Rockport Art Association.