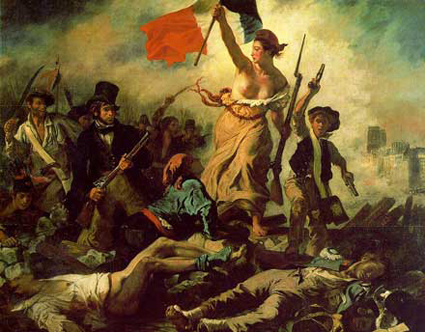 The painter Eugene Delacroix is considered one of the most influential and greatest of the French painters. Known primarily as a participant of the Romantic movement, his unique use of color and paint would come to influence the Impressionists and even Modernists such as Picasso.

Born into an artistic family, Delacroix would be forced by the early death of his father to enter into formal art studies as a way to insure a future career for himself. He studied with Pierre-Narcisse Guerin beginning in 1815, and by 1822 had submitted his first painting to the Paris Salon. The image of "Dante and Virgil in Hell" was accepted. The painting relied on Delacroix's technique of many unblended colors forming the appearance of a unified whole, but only when viewed from a distance. This use of paint would be emulated by the Impressionists years later.

It was also in 1822 that he began making entries into his famous Journal, which gives an accurate depiction of himself and his world throughout the rest of his life.

His next Salon entry came two years later, and not only was it accepted, but purchased by the French government, which was a remarkable event in consideration of the fact that Classicism was the predominant movement, and not Romanticism. The Romantics would not garner State support until after the 1830s.

Unlike other artists of the era, Delacroix did not undertake a painting journey into Italy, Greece of European locales, but instead travelled to England. He chose this unusual journey because years earlier he had been deeply affected by a painting of John Constable, and he felt a trip to his homeland might expose him to some of the same influences. His trip in 1825 left him with a lasting impression of the culture of the country, and one that would continue to influence his work.

In 1831 he journeyed to Spain, Morocco and Algiers which also inspired him, and for which he created several popular canvases. The artist would continually capture the events and locales that he witnessed, and in the 1830s the French Revolution would only add to his subject matter, inspiring his "Liberty Guiding the People", a painting that is considered to be his last Romantic canvas.

After this time his work focused primarily on public commissions, mostly mural work, including paintings done for the Louvre and at Versailles. This work involved a lot of physical demands, and it affected his health. He died in August of 1863 in Paris.