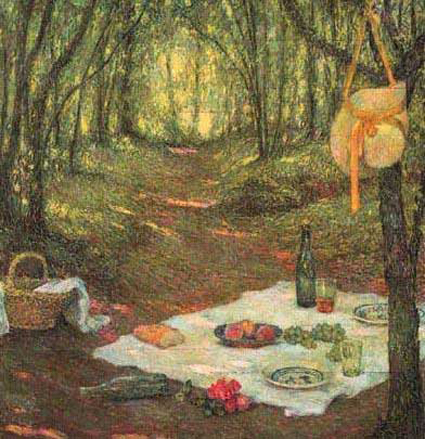 During his formal training at the Ecole des Beaux-Arts in Paris, painter Henri Le Sidaner would frequently visit the seaside town of Etaples as a way of re-energizing and restoring his spirit. Many of the school's students would frequently become frustrated during their long hours of copying at the Louvre, and the rugged coastal area would relieve him of his stress.

Heading into the outdoors, working "en plein air", was a first clue of Le Sidaner's future leanings towards some Impressionistic qualities to his work. He would not subscribe to any particular school in general throughout his career, and instead temper each influence with a more traditional approach or technique.

When he began to exhibit in 1887, he won instant recognition for his work and was soon traveling in Italy and Holland. By 1894 he would exhibit in the less formal atmosphere of the Societe Nationale des Beaux Arts. The work he was doing throughout the period is considered more symbolic than his later paintings. The images frequently depicted women in white who are set in shady, or dimly lit, gardens. The canvases do reveal an element of the mysterious that would play a stronger role in his later paintings.

After 1900 Le Sidaner's work rarely contained human figures at all, instead only implying their presence through props and clues. This work was also popular and he continued to remain in the public eye, staging frequent exhibits and participating in shows until his death in 1939.

Le Sidaner served as a professor at the Academie des Beaux Arts and became its president two years before his death. His works are in the collections of many major museums around the world, including the Museum of Modern Art in Rome and Tate Collection in England.