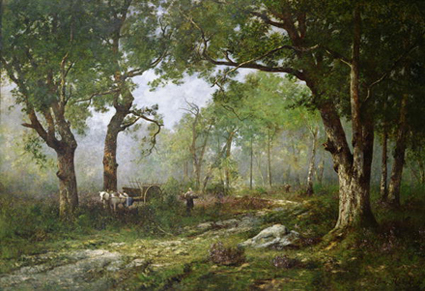 Known as a painter of the Barbizon school, Leon Richet would travel much farther than the Fontainebleau Forest to find his subjects. He was a lifelong seeker of natural beauty, and worked always to accurately record the effects of light in the landscape.

Born in Normandy in 1847 he studied at the Academy of Valenciennes, and he would eventually become a student of D�az de la Pe�a, Jules Lefebvre and Gustave Boulanger, but it would be la Pe�a who created the strongest impression on Richet.

Like his mentor, Richet's paintings would focus on landscapes, still lifes and genre scenes, but always with the relation between man and his surroundings in mind. Frequently depicted in Richet's scenes are single figures along a path or body of water, and these are a reflection of la Pe�a's influence.

Following his debut at the Paris Salon of 1869 demand for Richet's work grew significantly. He began traveling extensively by this time, and would continue to create works of power and mystical scenes in the natural world. His locations would include areas scattered throughout France and even into Belgium. His works include forests, seascapes and country settings.

His work is still in high demand, and frequently sought out by museums and collectors around the world. His paintings are in the collections of major museums including the Hermitage in St. Petersburg, the Musee d'Art Moderne in Nice and the Musee de Reims.