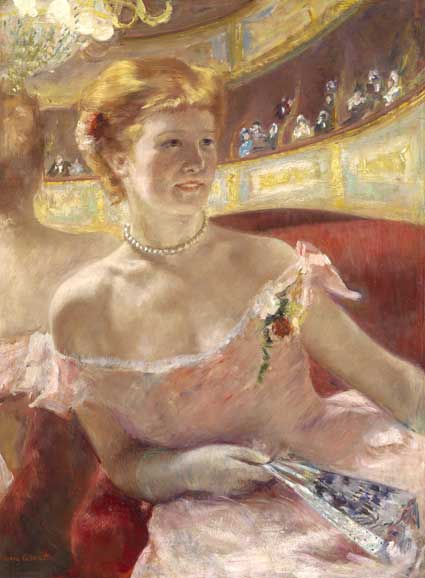 Constantly battling the effects of sexism and gender limitations, Mary Cassatt would study, paint and succeed at earning a career as a serious artist. She is recognized as one of America's most notable Impressionist painters.

Born into a wealthy family, Cassatt traveled widely as a child, visiting Europe and being trained in languages and the arts. Though her family was unhappy with her decision, Cassatt enrolled in the Pennsylvania Academy of the Fine Arts when she was fifteen. It was not unheard of for a woman to pursue art studies, but most did not anticipate making a career out of it.

She decided to leave the Academy due to its slow pace and poor attitude towards women. She headed to Paris to study Old Masters and take private lessons from Jean Leon Gerome (because women were not permitted at the Ecole des Beaux Arts). She made many friends while in the city and painted in the studios of some of the most prominent artists of the day. By 1868 her work was accepted at the Salon. Lack of success and a need to leave France during the Franco-Prussian War almost allowed her to give up painting.

A commission in 1871 sent her back to Europe, and by 1874 she was in France. Ongoing rejection from the Salon inspired her to change her subject matter and by 1877 she was asked to exhibit with the Impressionists. This began a profitable period in her life, but by 1886 Cassatt was no longer identifying herself with any particular school or movement. As the 1890s began she was painting and printmaking and serving as a role model to many artists as well as becoming incredibly popular with the American public. To date she is one of the most respected and frequently exhibited American artists.