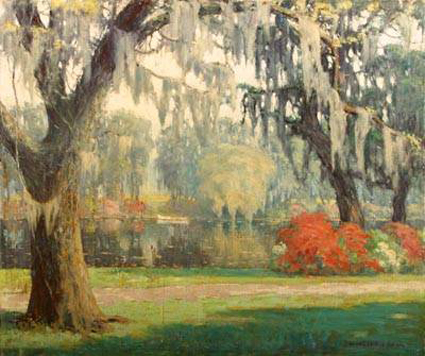 William Posey Silva, born in Georgia, is most associated with paintings of trees, dunes and landscapes. He was a late comer to the art world, not starting his professional career until he was almost fifty years old and already having enjoyed a successful life as a merchant, running an inherited business in Chattanooga, Tennessee.

He studied in Paris, beginning in 1907, after retiring from his business career. By 1909, he enjoyed his first showing in Paris and moved back to the US in 1910.

Silva was heavily influenced by the Impressionist school. His work mostly focused on naturalistic elements and his affinity for the work of Monet and Manet is expressed in his execution and in his use of line and color. He preferred to work outdoors, where he was able to capture the quickly changing natural world. He often preferred bright colors in rendering his scenes and had a love of trees as a subject matter.

William Posey Silva enjoyed a great deal of popularity throughout the American South and, eventually, relocated to Carmel, California where he continued to work for about 35 years. He was a very active and influential figure in the local art scene until his death.