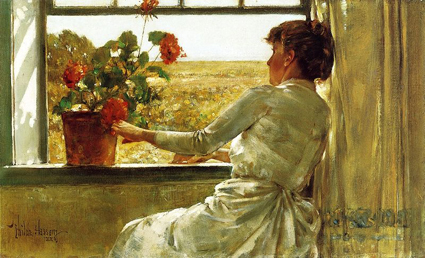 The advent of Impressionism as a popular and accepted school of painting; a great many painters who were skilled in the form in nearby New York City and the availability of rail service to the town of Old Lyme, Connecticut resulted in the formation of one of America's most innovative and productive art colonies.

Before the Old Lyme Colony Painters came into existence, there was no art colony that specifically centered around the Impressionist style of painting. The meeting of Henry Ward Ranger and Miss Florence Griswold, the proprietor of a mansion that took boarders, set the stage for an art colony that would see its greatest activity between 1900 and 1915. "Miss Florence" as the artists referred to her, was amicable to boarding the many artists who Ranger persuaded to visit from New York.

Ranger's initial influence on the Old Lyme Colony Painters was one of Tonalism but it all changed when Childe Hassam came to the colony in 1903. From that point on, the colony would be forever associated with Impressionism and with some of its most famous practitioners.

The colony was exclusive. Miss Florence decided who would be allowed to board based on the advice of the artists working at her home.

[ Back to Movements page ]